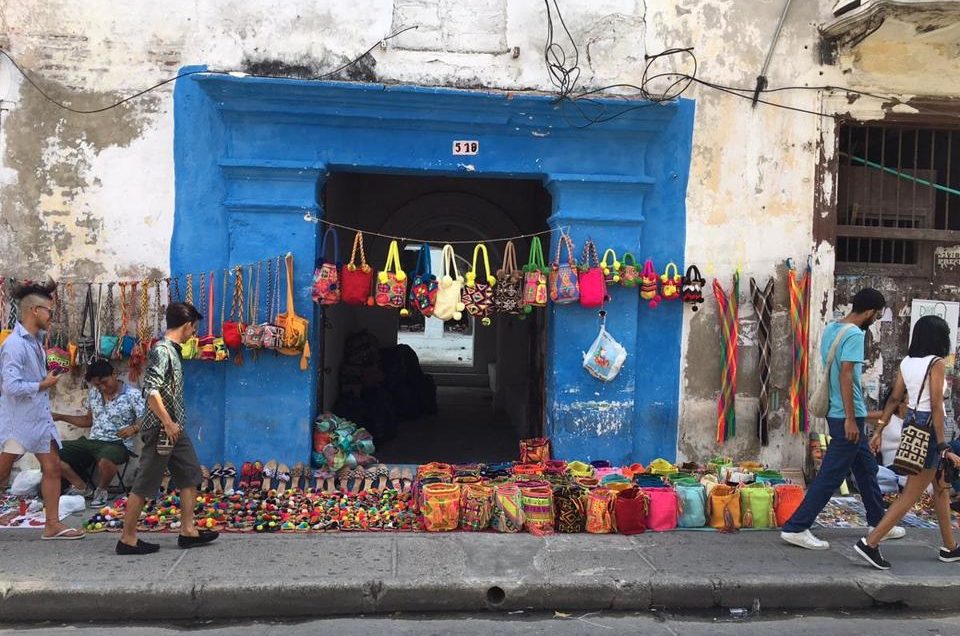 CARTAGENA, Colombia — When my daughter and I arrived in Cartagena recently, I half-expected to see camellias dropping from the sky, gypsies selling magic carpets, and a hen laying a hundred golden eggs to the sound of a tambourine. This is, after all, the hometown of Gabriel Garcia Marquez, who wrote masterpieces of magical realism such as “One Hundred Years of Solitude” and “Love in the Time of Cholera.”

But instead, we had to settle for profusions of bougainvillea, sidewalk salesmen with hats and shoes and bags, and lots of overgrown crows in this charming colonial city, enclosed by a wall built centuries ago to keep marauders out. Today, that wall envelopes tourists in an embrace that seems all the more welcoming since the Colombian government signed a peace agreement last fall with the rebel group FARC, after decades of armed conflict.

Cartagena, on the country’s Caribbean coast, was founded in 1533 by the Spanish and has always been a major port. Because of military and pirate attacks, it remains the largest walled city in Central and South America. In one epic assault in 1741, British naval officer Edward Vernon brought 186 ships with 23,000 men to capture the city, only to be defeated by a much smaller Spanish force. The Castillo de San Felipe still has an elaborate tunnel system that allowed soldiers avenues of escape, and now welcomes tourists.

Because of its fort and walled city, Cartagena in 1984 was named a UNESCO World Heritage Site. Some Americans may connect Cartagena with the hit movie that same year, “Romancing the Stone,” where Michael Douglas and Kathleen Turner danced in the city’s square — though it was filmed in Mexico.

Or maybe you remember Cartagena from the news in 2012 when US Secret Service agents were caught in a prostitution scandal. God knows what Garcia Marquez, known locally as “Gabo,” would have done with that. “My heart has more rooms than a whorehouse,” his lovelorn protagonist declared in “Cholera.”

Today, Cartagena is two cities: the Old Town with its narrow cobblestone streets and blooming balconies, and the sprawling metropolis of nearly a million people whose skyscrapers seem at odds with the romance of the centro historico. We stuck to the Old Town, and it took our airport cabby, a native of Cartagena, a long time to find our hotel.

That’s because, as one guide told us, the streets are one-way, their names change every block, and they were laid out crooked in order to bring in crosswinds from the ocean. When we finally arrived at La Passion Hotel, we found ourselves in a restored 19th century mansion centered around a courtyard that opened up to the bluest sky. We’d gotten a deal through hotels.com —about $100 a night — which included a breakfast of fresh fruit and squeezed juice, toast, and eggs with lots of good stuff in them.

It was served in the bar area adjacent to the rooftop pool, which offered a 360-degree view of the red-roofed town. We could hear the clip-clopping of horses and buggies three stories below, and see the skyline of the other Cartagena.

It was hot in March, in the 80s, and at the end of our first day of wandering, we found ourselves, totally randomly, outside Alma, where we became Happy Hour regulars for the next few days. Gabo, who wrote fervently about destiny, would have approved. Alma’s bartenders mix margaritas, mules, and mojitos, and keep tall glasses on the bar filled with fresh herbs. My coco mojito came with tons of grated coconut on top, and Megan’s sangria was full of fresh fruit, topped with sprig of rosemary.

I don’t know if it’s because we left Boston in one snowstorm and came back in another, but the street life in Cartagena — the colors, flowers, music, scents, chatter — seemed to be in Technicolor and surround sound. There’s always something to look at, someone to talk to, music to twirl to, street food to sample.

Hibiscus, giant ferns, roses, sunflowers, and daisies grow absurdly everywhere, and it’s easy to see where Gabo got his obsession with flowers.

Hawkers abound, and the sidewalks, narrow to begin with, are blanketed with woven bags, Panama hats, Cuban cigars, and trinkets. If you don’t want to buy, don’t even make eye contact, or you’ll find yourself the owner of a hat that has magically appeared on your head, or a bracelet on your wrist.

Somehow, I acquired a pair of espadrilles ($10) because I uttered the word: “Later.” The guy took me literally. One afternoon, as we sat at a table at the weird KGB restaurant and bar — with “comrade” mannequins standing guard at the door — a man walked up to the open window with a shoebox of bracelets and leaned in.

I could hardly say “nyet” before he had four or five of them spread out on our table — he was still standing outside — and had lit a match to one bracelet to show that it “was crystal, not plastic.” Before I knew it, I owned two.

That night, I dreamed a man with a stack of hats was chasing me.

Tasting the local food is always a travel imperative. Through Cartagena Connections(cartagenaconnections.com), Megan and I signed up for a street food and culture tour, $30 apiece. We met our guide, Jan, at the Plaza Parque Fernandez de Madrid, and 10 of us set out on a 2½ hour walking-and-noshing tour of Old Town and its funky neighbor, Getsemani.

Buildings here are painted a rainbow of colors, including purple, gold, coral, blue, green, aqua. They used to be white-washed, but this caused bad glare in the sun, and now the city must approve each color before it goes on.

In Cartagena, locals often snack on the street. At our first food stop on the tour, a vendor was dipping plantains in garlic and salt, deep frying them and serving slices with local cheese. For the next couple of hours, we sampled spiced mango, empanadas, yucca stuffed with cheese, fried pork bellies and bunuelos. Last was passion fruit lollis, or homemade popsicles.

We then walked through the working class neighborhood of Getsemani, which has lots of good bars, used to be a landfill and is now turning into a hip ’hood. Huge murals painted on outside walls tell the story of the gentrification and displacement of artists and others.

The tour ended at a café, where Jan explained that Colombian coffee isn’t very good, since there’s a history going back to Spanish rule of exporting the best stuff to Europe.

But there is good chocolate, and Megan and I spent serious time at the Choco Museo, or the museum of chocolate, a free self-guided place where exhibition boards explain the chocolate-making process, “from bean to bar.” We skipped a chocolate-making class but bought several bars and a couple of chocolate liqueurs in my favorite flavors, one mint and one ginger.

We also made a pilgrimage to the home of Garcia Marquez, who died in 2014. We couldn’t see over the high orange walls. But next door, a boutique hotel, Makondo, named for the fictional town in “Solitude,” has painted his beaming visage on its exterior wall, along with his quote: “Ningun lugar en la vida es mas triste que una cama.” No place in life is more sad than an empty bed.

Because Cartagena’s beaches are lousy — choppy surf, gritty brown sand — we decided to spend a couple of days on one of the Rosario Islands. An hour’s boat ride brought us to Isla Grande and the Hotel San Pedro de Majagua (we paid about $100 a night, through hotels.com). Here, the Caribbean is smooth, clear, and turquoise, with sugary sand. There are pelicans and palm trees and cold rum drinks. There are no high rises on the island, no roads and no vehicles, unless you count bikes.

One afternoon, we signed up for a guided walk-and-canoe tour. Somehow, Fredees, our guide, paddled us through a maze of mangroves, eerie and quiet and beautiful. We tied up the canoe and walked another half hour, through his village. Fredees told us about a thousand people live on the island, which is part of a national park. There were drowsy dogs and humble huts and a latrine with a Peace Corps emblem: obviously a volunteer’s long-ago project.

Even on this mostly deserted island, there were guys selling stuff. I bought a beautiful, “hand-polished” conch shell necklace for about $18.

The food was good, the drinks were cold, the ocean was warm, the sunsets amazing, and before the boat took us away our last morning, I gave the room one last look and would only add this to Gabo’s quote: No place in life is more sad than an empty bed — on a paradise island.

Bella English can be reached at english@globe.com.